Posted on October 1, 2008 | 5 Comments
In a previous blog entry I mentioned about my namesake town here in Botswana, Sowa.  Well we had our spring break, or ‘short vacation’ as the emic term goes, and I convinced a friend to visit the salt pans in Sowa town.  He brought along three other people as well and we all set off Thursday night on the train from Gaborone to Francistown.  Boarding the train was an event.  The line was hundreds of people long and everyone rushed foward to get on the train (and get a seat to avoid standing for the 8 hour ride).  Well, the train had not even stopped moving as people came to blows while holding on to the side of the train car.  I saw lugage knocked under the cars, but thankfully no people.  We were riding first class, which ment we got a sleeper car.  These expensive (20 USD) tickets were not in such demand, as we were two people to each four person room.  The train is popular because it is about 7 USD cheaper than the bus.

Daily train from Gaborone to Francistown

After arriving in Francistown we had to pass a few hours waiting for the bus to Sowa Town. The landscape changed as the minibus made its way to Sowa.  I noticed that trees were becoming more sparse and the heat was more intense.  Upon arrival in Sowa Town we got a ride to the Country Club (yes I am serious) where we were generously greeted with free water and bags of chips and then got a free ride out to a lodge near the salt mine and the salt pans.  We then walked out to the salt pans (Sua Pan) to set up camp.

Did I mention I had a 70 pound backpack? And it was pushing 110 degrees F?

So we would sit out on the salt pan during the day and watch the horizon melt, then reform, distant rocks looked as though they were floating, and at high noon heat the heat waves off of the salt in the distance made it look as though we could tell the earth was spinning as fast as it is.

Matt and I spent a morning/afternoon hiking out to the Pans as far as we dared with only a compas and some paper to record which directions we walked and how many paces.  This is the resulting picture and it portrays very well on what it feels like in the middle of the salt pans. 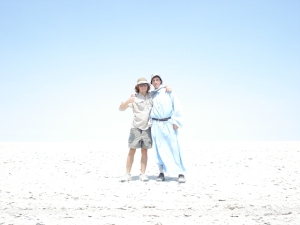 I am wearing a thob, which is a piece of clothing worn by some Muslim men. It is an excellent way to beat the heat and I would highly recommend the fashion to desert venturers.

A couple of nights while we were there we ventured back to the lodge to steal a dip in the pool and visit with other people.  We met Mpoh, a Motswana guy in his 30’s who could quote at length from almost any animated movie we asked him about.  Then there were a couple of Afrikkaner gents, J.P. and Jean, who took us for a ride to see a million flamingoes in the salt pan lake near the salt and sodium bicarbonate (backing soda) mine.  As dry as the area is we only have to scratch the earth about three inches deep to find wet dirt.  However the water is pretty much a saline solution that cannot be drank. 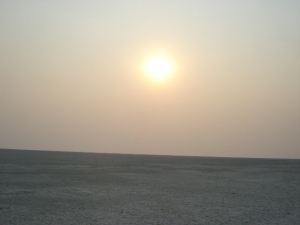 Now you can see why it is quite easy to get desperatly lost out here...

We returned home (with light packs having eaten much food and drank much water) via bus.  Some members of our excursion decided to go on to Zambia and Zimbabwe.  Oh, and of course I mentioned the coincidence of my last name being Sowa.  I we met by reactions of disbelief (the most common), speechlessness, questioning if I was born there, but the reactions always ended with a bout of laughter.  It is nice to make people laugh.

This entry was posted in Uncategorized, What Foreigners Do in Africa and tagged botswana, Sowa Town, Trains, Travel. Bookmark the permalink.